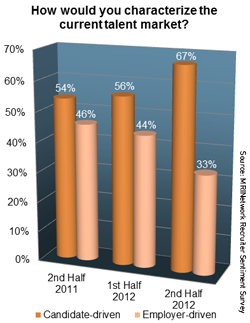 Employment markets are most often measured by unemployment, a quintessential macroeconomic indicator. Yet, on the microeconomic level — the level that all companies work on — it is an indicator that is far from representative. In today’s economy, the headline unemployment number is perhaps less representative than ever before.

For many sectors, and more importantly, for many skill sets, the high unemployment of the last several years remains stubbornly in place. But those industries and skill sets are being countered by others that are adding positions and exhausting the talent supply. Looking at the macro trends, the labor market seems to be at a standstill, with talent supply perhaps even loosening. Yet, at the micro level there is a strengthening undertow.

In a recent survey of MRINetwork recruiters — who work primarily with the professional and managerial segment of the workforce – 67 percent said they would characterize today’s talent market as candidate-driven, an increase of 13 points from a year ago.

“In technical areas, there is a severe shortage of talent and salaries are going up,” said one recruiter in the survey. Another respondent noted that, “Great candidates are increasingly more difficult to locate. While technical candidates remain sparse, the issue has become more widespread and now includes areas such as HR specialty, accounting, and marketing.”

The level of demand for talent in professional occupations, though, doesn’t mean full employment. In the most recent report from the Labor Department, the professional, managerial, and related unemployment rate was 4.4 percent. Before the recession that rate was as low as 2.1 percent, but various factors continue to keep it higher.

“The message from [the] C suite is ‘do more with less.’ There’s no room for marginal players,” as one recruiter put it. While employers are hiring, recruiters note more and more of those searches being for “white tigers,” with lists of requirements that screen out almost all possible candidates.

“Employers remain too focused on finding a candidate who has every bit of experience on the company description. Employers still feel that plenty of people are available because of erroneous news reports about unemployment,” noted a recruiter.

Once the right candidate is found, the need to act quickly has become more urgent. According to the survey, 60 percent of accepted offers were made less than four weeks after the first interview, and 47 percent were made after two interviews or less, a 10 and 19 point increase from a year earlier. Yet, that is an urgency many employers still don’t recognize.

As one recruiter recounted about the situation, “Employers … are afraid to make the wrong hire. Before the recession, we were hearing things like, ‘We know he doesn’t have that one thing we were looking for but everyone liked him and we are going to make an offer anyway.’ Now we are hearing things like, ‘everyone liked him and he has everything we are looking for but we’ve decided we now also want this.'”

The headline numbers for some time will continue to show a labor market where unemployment is high, job growth is low and people remain ready and available to work. In some segments that is true, but using that philosophy in other parts of the market will result in top candidates turning down offers, and critical positions being left unfilled.