In the depths of the recession, as unemployment rates were rising and everyone knew someone who was being affected, “It’s better than no job at all” became a common refrain across the factory floors and offices of America. While it was a poor retention strategy, it was a worse recruiting strategy and now, with the economy on the mend, candidates are no longer falling for it.
“Candidates now know-as much, if not more than hiring managers-that the market is improving,” says Rob Romaine, president of MRINetwork. “Top candidates are getting multiple offers, and those who don’t like what they hear from one employer are more frequently willing to wait for another suitor.”

Employment growth was below expectations in March, with just 120,000 positions added compared to more than 200,000 in some projections. Though that had followed four months in which more than a million positions were added collectively. The rate of growth is expected to remain decidedly slower for the remainder of the year. However, short of the U.S. economy slipping back into to a major recession-something almost no economist is projecting-the labor market is going to remain competitive. 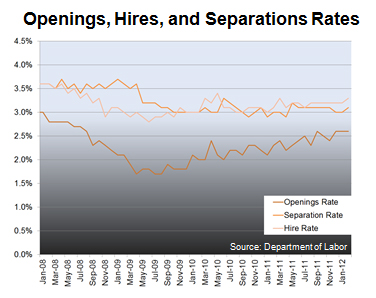 “It’s dangerous to underestimate the competitiveness of the labor market. Companies are pursuing plans, bidding on business, and making projections, only to later realize that it is taking many months for their internal HR departments to fill the roles and often at higher starting salaries than expected,” notes Romaine.

The job openings rate has risen from 1.8 percent in the worst of the recession to 2.5 percent in February. Over the same time, the hires rate has risen from 2.8 to 3.3 percent, while the separations rate has fallen from 3.5 to 3.1 percent. While the positions available and being filled span almost all sectors of the economy, the bulk of employees being hired share one thing in common: four-year college degrees.

“Candidates have realized how rare a commodity they are, but when an employer isn’t making them feel courted, somebody else will,” says Romaine. “It’s not that top performers are demanding the red carpet treatment during the hiring process, but when they have multiple offers, the style of the process can be as important as the substance of the opportunity.”