In recent months, initial unemployment claims have edged down and the four-week moving average has fallen from over 400,000 claims a year ago to less than 370,000 a week. In September, the reported unemployment rate fell to 7.8 percent crossing the critical psychological barrier of 8 percent for the first time since early 2009. U.S. consumer sentiment has actually reached a five year high in October according to the University of Michigan index.

“There is good reason to look at the economic data and say that the workforce situation continues to improve,” says Rob Romaine, president of MRINetwork. “People continue to see friends and neighbors going to work and nothing will rebuild sentiment faster than that. Consumer debt, which is increasing after years of consecutive quarterly declines shows that people have more confidence in their jobs and in their economic future.”

Adding weight to the deluge of economic figures, GDP grew at an annualized rate of 2 percent from 1.3 percent in the second quarter of the year. The figure was more positive than many economists projected, yet it still is unlikely enough to pull growth in 2012 as a whole over 2 percent. Such growth, though, is not typically enough to drive substantial improvements in employment markets, and certainly not enough to push unemployment down half a percent in two months. Yet, that isn’t necessarily cause to think that either the employment or GDP figures are incorrect.

One potential cause is that productivity, which has increased through both the recession and the recovery, has reached a peak and employers are finding they can’t keep running with the same level of staff. The current level of economic growth has become less of a temporary condition and more of the new normal. Managers can no longer count on staff to continue working under emergency conditions, especially as corporate America continues to see record profitability. Since the economy’s peak in October of 2007 corporate after tax profitability has grown at nearly three times the rate of GDP. 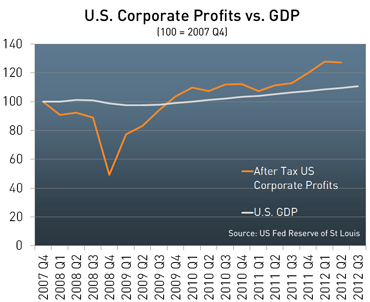 Since about 2008, the number of employees voluntarily leaving their jobs fell significantly as people didn’t want to, or couldn’t change jobs at the rate they once did. The U.S. quit rate fell as low as 1.2 percent in late 2009, but has since recovered to 1.6 percent. The rate among workers who feel overworked or under-compensated is understandably even higher.

“Even if a company isn’t cutting its staffing levels, it likely is losing employees to churn at a higher rate today than they were two years ago,” says Romaine. “While though the recession managers might have tried to cover those losses with existing staff, today companies have reached a point where most positions vacated need to be backfilled. If a salary lasted in the budget through the recession, it was a position worth keeping filled.”

If hiring is increasing, however, that could very well help add buying power to the economy just in time for the holiday season, giving a possible boost to fourth quarter GDP.

The United Kingdom recently experienced a similar situation where employment was growing while GDP was shrinking. The counter cyclical employment growth was puzzling to many economist giving it names like ‘the employment paradox’ and the ‘economic puzzle.’ Whatever the cause though, the increased employment likely helped to lift the UK economy out of recession in the third quarter.

So whether the dog wags the tail, or the tail wags the dog, 2013 seems to be building the potential for some upside surprise for both the economy and labor market.